The most dangerous Wizard in the EU 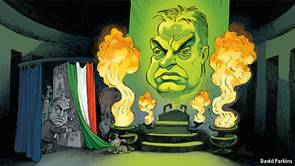 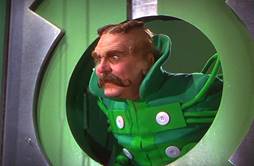 Viktor Orban (in this week's Economist) and the Wizard of Oz

One year ago ESI described Viktor Orban as the "most dangerous man in the EU." Since then, Viktor Orban has exploited the confusion and insecurities around the European refugee crisis, and the weakness of mainstream political leaders, to further expand his influence in EU capitals and in Brussel

This week we talked to the Economist, explaining what made Orban so dangerous for the EU:

"Mr Orban presents a unique danger, argues Gerald Knaus of the European Stability Initiative, a think-tank, because he injects a far-right virus into the bloodstream of Europe's political centre. Fidesz's membership of the European People's Party, a centre-right pan-EU political group, gives Mr Orban the ear of Angela Merkel, Germany's chancellor, and other mainstream conservatives. Yet while he may spurn hard-right outfits like France's National Front or the Austrian Freedom Party, he borrows from their playbook. He lays charges of treason against those who seek to import "hundreds of thousands of people" from "groups outside European culture". Migrants have turned parts of cities like Berlin and Stockholm into "no-go zones", his government argues."

Viktor Orban likes to present himself as a Hungarian hero, a rebel in the mould of the leaders of the revolutions of 1848 and 1956 – a man single-handedly opposing treacherous elites in Brussels and Berlin who seek to destroy Europe. We believe that Orban is more reminiscent of the Wizard of Oz:

"Mr Orban's rabble-rousing offers little to policymakers grappling with mass migration. True, he saw earlier than others that borders had to be controlled before grand resettlement schemes could be countenanced. His scepticism about the EU's relocation plan has been borne out by its failure to move more than a few thousand migrants, even to willing countries. But his acolytes have no answer to the problem of refugees already in Europe. His ideas on African migrants (build a giant camp in Libya) or Europe's demographic problems (encourage natives to have babies) expose a fundamental unseriousness. Pull aside the screen, argues Mr Knaus, and the scary Mr Orban will be revealed as a shrivelled demagogue with nothing to say."

As the pivotal scene in that wonderful book describes, once the lion roars and Toto tips over a screen, everything changes. Suddenly:

"all of them were filled with wonder. For they saw, standing in just the spot the screen had hidden, a little old man, with a bald head and a wrinkled face, who seemed to be as much surprised as they were … "I am Oz, the Great and Terrible," said the little man, in a trembling voice. "But don't strike me – please don't – and I'll do anything you want me to."

And then Oz admits quickly that he was all into making believe and humbug, a former circus artist turned ventriloquist. And that the Emerald City (Hungary) appears green (under threat of being overrun by Muslim hordes) because the wizard made everyone put on green spectacles:

"… but when you wear green spectacles, why of course everything you see looks green to you."

It is time for the EPP to act

It is high time for the EPP to respond to this challenge and show Orban where he and his ideas really belong: to the far-right, the European fringe. How else could the EPP remain credible given that Orban told Hungarians on their national day this year:

"Today's enemies of freedom are cut from a different cloth than the royal and imperial rulers of old, or those who ran the Soviet system; they use a different set of tools to force us into submission. Today they do not imprison us, they do not transport us to camps, and they do not send in tanks to occupy countries loyal to freedom. Today the international media's artillery bombardments, denunciations, threats and blackmail are enough – or rather have been enough so far … The peoples of Europe, who have been slumbering in abundance and prosperity, have finally understood that the principles of life upon which we built Europe are in mortal danger."

These enemies, according to Orban, are already in power in Brussels:

"If we want to stop this mass migration, we must first of all curb Brussels. The main danger to Europe's future does not come from those who want to come here, but from Brussels' fanatics of internationalism."

These powerful villains, so Orban, are determined to destroy nation states:

All of this leads to the question: who are these traitors in Brussels, exactly?

Jean-Claude Juncker, president of the Commission, whom Orban recently called a dangerous "nihilist"? Donald Tusk, chair of the Council? Manfred Weber, leader of the largest faction in the European Parliament? Or the leader of the most influential government in the EU, Angela Merkel? 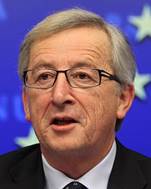 All four of them are, of course, among the most influential members of the EPP, which also constitutes the largest single faction in the European Parliament, and is the most powerful party when it comes to running European institutions today. Orban implies that they are also enemies of the people of Europe. And his rhetoric indicates that the Platform of the EPP is not to be taken seriously, a platform which states proudly:

"Our political family is the driving force of European integration. The European Christian Democrats founded in 1976 - as the first European party – the European People's Party. It has become the party of the centre and the centre right. After the end of the Cold War two decades ago, we helped to lay the foundations for a Europe truly whole and free."

"While democratic ideas are spreading in some parts of the world, disguised authoritarian rule and fundamentalist, anti-Western thinking have become more acute elsewhere."

"Together in a political family which is now broader than ever, we reaffirm our commitment, therefore, to the common core values of the EPP. 006. These values are: the dignity of human life in every stage of its existence, freedom and responsibility, equality and justice, truth, solidarity and subsidiarity. The Christian image of Man is their point of departure. Achieving the Common Good is their final objective. For their implementation, a strong civil society is indispensable. In its pursuit we are guided by the use of reason and historical experience."

The question today is how much longer the rest of the EPP believes that it can afford to let a man who attacks them in the language of Marine Le Pen, Geert Wilders, Hans-Christian Strache and Jaroslaw Kaczynski, do so from within the family tent? 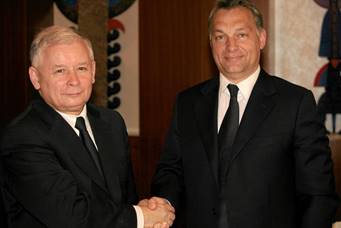 Perhaps the failure of the recent referendum in Hungary, and the ever shriller rhetoric against the EU and its elites coming from Budapest, provide the right moment to invoke article 9 of the EPP statutes: according to these statutes a member party can be excluded by the Political Assembly of the EPP. The proposal for the exclusion of a member may be submitted by the Presidency, or seven ordinary or associated member parties from five different countries.

This should be done now, in the interest not only of the EPP but of all Europeans who cherish the core values set out in the 2012 EPP Platform.

The Guardian, Patrick Kingsley, "Hungarian right does not want to leave the EU. It wants to subvert it" (2 October 2016)

Gerald Knaus, the head of the European Stability Initiative, a Berlin-based thinktank, said that he hoped Orbán's setback would loosen his psychological hold over other European leaders. A prominent critic of the Hungarian leader, Knaus said members of the European People's party, the continent's largest alliance of centre-right parties, should now expel Orbán's party, whose far-right policies are now at odds with mainstream Christian democracy.

"If he fails to get the necessary 50% in a referendum of his choice, where he mobilised everything he could to get people to turn up and vote – it should hopefully be seen as a sign that he is in fact vulnerable," Knaus argued. "And that his apparent total dominance of Hungarian politics is as much about the weakness of the opposition and the strange electoral system as it is about his popularity."

But Knaus warned that Orbán still had an outsized influence on European affairs, as indicated by "the striking indifference on the part of the EU to taking its own laws seriously". It is still, Knaus added, "far too early – whatever the results today – to count Orbán out."

The Guardian, Patrick Kingsley, "Hungarian referendum decides whether to slam the door on migrants" (1 October 2016)

A scuffle about 1,294 refugees is in fact a war over the role of the nation-state, and the nature of European democracy, argued Gerald Knaus, the director of thinktank European Stability Initiative. "It's a performance that's not about results – he's not worried that any refugees will end up in Hungary," said Knaus, a major player within refugee-related politics in Europe. "The refugee issue for Orbán is really just a means to an end – and that end is a cultural counter-revolution in Europe and an end to liberal Europe," he said.

More in Hungarian on Portfolio.hu and Napi.hu.