Refugee crisis – a breakthrough is possible 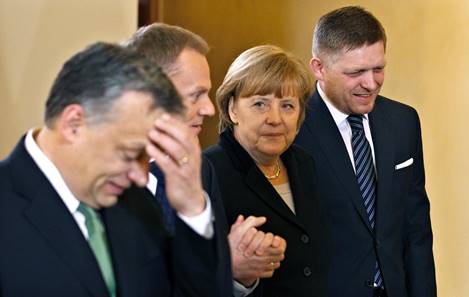 Sometimes the best way to advance is to take a step back. Reculer pour mieux sauter. This is certainly true in the European Union today.

There has been no shortage of warnings by EU leaders before this week's European Council meeting: Europe resembles the continent "one day before World War One" (Donald Tusk). Europe has two to four more weeks before its founding principles will break down (Mark Rutte). Pessimism is spreading due to the inability of European leaders to restore control over external borders and manage the refugee crisis. Populists rejoice, pushing an anti-refugee, anti-liberal, anti-Muslim agenda. Such pessimism can be corrosive. It can make finding even available solutions impossible.

In fact, Europe's leaders are right to feel pessimistic about their policies. Their flagship policy - relocating 160,000 asylum seekers from Greece/Italy to other states – is a weekly humiliation, its failure painfully obvious every time the European Commission publishes new numbers. Relocation is failing everywhere: in Greece, in Italy, in receiving states.

For those who like to present the EU as both incompetent and domineering, this is a godsend. For those who care about a liberal and united Europe it is a nightmare. So what is to be done?

For those involved in the process, relocation is intensely frustrating. There are no strategies that suggest that it will work any better any time soon. And yet, despite four months of evidence, policy makers repeat the mantra that "more effort is needed." This week's EU summit will likely once again conclude that "much remains to be done."

We must challenge one popular myth: the notion that it is the fault of Greece that relocation of refugees is not working. In fact, this scheme it is not working any better in Italy. The problem lies deeper.

Relocation: even when it works, it fails

Superficially, relocation seems to be an attractive proposal. It is "European", "rational", it is about "solidarity", there are quotas. Some dream of relocation on a vast scale across the whole of the EU. This is a dream, however, which distracts attention from the much more real nightmare that a common European asylum policy would be defined by Viktor Orban and his allies, and that the current failure of EU policy adds to their strength. It is not enough in a crisis for a policy to appear to be attractive. It must also work. The problem is that relocation as presently designed would be a failure even if it worked.

To see this, imagine that relocation had worked without a hitch in the past three months in Greece.

Assume a best-case scenario. 100,000 people arrived in Greece in December 2015. Imagine that Greece had managed to register, identify and accommodate every single one of them. Greece then divided all of them into two groups: those who qualify for relocation, and those who must apply for asylum in Greece or be returned to their home countries.

Imagine that people then patiently waited to be assigned to another European country, living in some hotspot/refugee camp/private accommodation until their turn to leave Greece comes. Imagine that all EU member states had made the allocated places available by the end of November. About 60 percent of those who arrived in Greece in December 2015 – 60,000 – would have qualified for relocation. 40,000 people would have had to remain in Greece. Fast forward two months: in January and February 2016 another 100,000 people in total arrived in Greece. Again, 60 percent would qualify for relocation.

Note that in this scenario Greece would have had to temporarily host 200,000 new arrivals in the space of three months (three winter months with relatively low numbers).

Of the arrivals in Greece between December and February, 80,000 would remain for the long term; as long as their asylum claims would take in Greece, and as long as they would not be returned to their home countries. In only three months, Greece would have become a huge refugee camp.

Some European leaders believe that relocation could work if only migrants and refugees were prevented by fences along Greece's northern border from leaving the country. Let us think through the implications of this policy as well.

If this had been implemented successfully in the past three months, Greece would be hosting many hundreds of thousands of people today: the kind of numbers that stretched rich countries with efficient administrations – Sweden, Austria – to their limits in 2015. This would certainly overwhelm Greece, already in the middle of a social and economic crisis. And an overwhelmed Greece would hardly be able to carry out reforms, reigniting the Euro-crisis as well.

What is most striking, however, is that even in this scenario, in which both fences and relocation somehow suddenly work, relocation would not stop refugees from arriving in the EU. On the contrary: if refugees were to begin to see this scheme as their only way to get into the EU in 2016, they might rush to Greece in ever larger numbers in the short term, in order to get one of the few, limited places.

Note that the vast majority of people supposed to be relocated from Greece in the next months are currently in Turkey. If relocation from Greece worked efficiently, then it would give people an incentive to cross the Aegean now, to risk their lives and to enrich smugglers. This was pointed out, many months ago, by David Cameron and Viktor Orban. It would strengthen the credibility of EU institutions to admit that they had a point.

Of course, in reality the total number of people relocated in four months has nothing to do with the scenario outlined here: it was less than 100 a month, from either Greece or Italy, 583 in total. Even if this were to increase tenfold, it would make little difference. Relocation is symbolic politics, at a time when real solutions are needed. It is a policy that an EU under huge pressure cannot afford.

Instead of relocation: resettlement and readmission

The relocation scheme diverts attention and precious resources – administrative capacity, political capital, money, time – from the challenges that ought to matter most at this moment:

If the 100,000 people to be relocated from Greece were instead resettled directly from Turkey, in a safe and orderly fashion, as part of a plan – the Merkel-Samsom plan that also foresees a Turkish commitment to implement its readmission agreement with Greece in the Aegean – the impact of it succeeding would be very different from that of the current relocation effort:

In recent days, leaders in the Netherlands and in Germany have continued pushing for a coalition of willing EU member states to take contingents of Syrian refugees directly from Turkey, in return for willingness in Turkey to take back anyone who crosses to Greece. The efforts to build a broader coalition would be helped by suspending the current relocation scheme.

After all, readmission requires serious preparation to work as foreseen. It demands the full attention of already overstretched administrations, particularly in Greece, which would need to be able to process the asylum claims of those who reach its islands within days and then to return people forthwith to Turkey as a safe country for refugees. It would require effective outreach and communication towards refugees, something that has so far eluded the EU.

All this calls for a detailed plan, developed by Greece and Turkey, jointly with the EU, EASO and Frontex, strongly supported by outside help.

In parallel to the suspension of relocation all EU member states should be called upon to voluntarily take at least the number of people that they would have been required to take from Greece, but to do so directly from Turkey.

There would be no coercion. All member states could check the fingerprints of those they accept in order to identify possible security risks. They would be helping a NATO ally within a voluntary burden-sharing scheme. Under these conditions: would Poland, would the Czech Republic, still be unwilling to accept a few thousand Syrian refugees – families, who have fled from war - directly? And if yes, on what grounds?

To make resettlement voluntary would at least shift the focus of the debate. It would expose those who show no solidarity, rather than blaming those who do, by removing the spectre of relocation of millions on the horizon.

This could be the single most effective step to put those who talk about solidarity, but exploit the fear in European societies of even a tiny number of genuine refugees, on the defensive.

In recent weeks Germany and Turkey have negotiated a serious agreement for a broader coalition of willing countries to resettle large number of Syrian refugees directly from Turkey. The outlines of such an agreement are promising:

Criteria for eligibility are clear and precise

Candidates have to be Syrian nationals; displaced by the conflict in Syria; registered by the Turkish authorities prior to 29 November 2015; do not constitute a threat to public order or public security; and a substantial part of the scheme shall be used for families.

There would be expedited resettlement procedures:

It is also noted that the resettlement procedure should be concluded as soon as possible.

One of the most difficult questions in these talk is how to link efforts to control movement in the Aegean with parallel resettlement.  In recent meetings ESI suggested the following linkage:

"The Member States participate in this humanitarian resettlement program on the assumption that Turkey fully implements the existing readmission agreement, agrees to be considered a safe third country by Greece, and that it will cooperate with Greece and the EU efficiently and speedily."

It is important that any commitments are precise and measurable. These would be.

Ideally, the resettlement of some 900 people a day, every day, from Turkey could start already in March. By fixing a minimum daily number rather than an overall annual number this remains flexible to respond to developments.

If Austria committed to take – in the course of the coming twelve months, after the entry into force of such an agreement – half of what it has defined as its annual "target or upper limit" (that means 20,000), if Germany committed to take 200,000 in a year (given that its population is ten times bigger, this would be the same contribution as the one made by Austria), if Sweden and the Benelux took the number of refugees they estimate they can handle and if France committed to take 30,000 people from Turkey rather than from Greece, then this coalition of the willing would have a strong core.

All other EU members would be asked to join as well, also voluntarily, and without an obligation any more to also relocate people from Greece. With one stroke the EU would no longer appear as hopeless, inefficient, and divided as it does at this moment.

This too might fail. But as opposed to every other scheme on the table now, it could also work. Whether it will depends on whether Europe's leaders continue to behave like sleepwalkers, or whether they will focus their efforts and get serious.

ESI is planning events on visa-free travel for Turkey and the refugee crisis at the Columbia Global Center in Istanbul for Wednesday, 24 February at 10:00 and at TEPAV in Ankara on Friday, 26 February at 14:00.

Update on advocacy across Europe

In recent weeks ESI analysts have presented concrete ideas on this issue in many fora across Europe. Here is a short overview of interviews and articles available in different languages.

NRC Handelsblad, Marloes de Koning and Stéphane Alonso, "Het 'plan Samsom' was eigenlijk van hem. En dit is wat hij echt denkt" ("The 'Samsom Plan' was actually his. And this is what he really thinks") (13 February 2016)