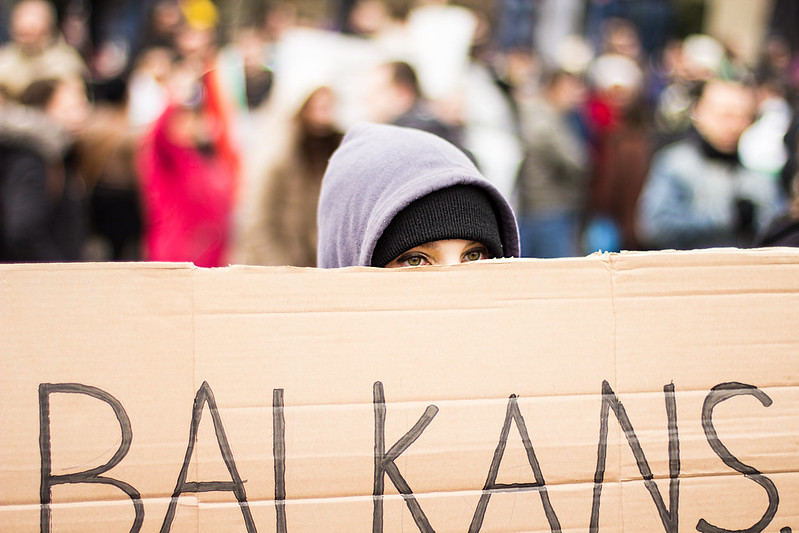 Bulgarians are famously unhappy. A few years ago their pessimism came to international attention. A Gallup Poll discovered in 2009 that the citizens of this small Balkan nation had lower expectations for how their life would be five years later than Iraqis and Afghans. Bulgarians were not surprised by this discovery. A leading Sofia-based think tank, the Centre for Liberal Strategies (CLS), had already published a paper in 2003 titled Optimistic Theory about the Pessimism of the Transition. The latest World Happiness Report confirmed this global reputation for morosity in 2013. Out of 156 nations it ranked Bulgarians 144th, behind Iraqis and Afghans, Congolese and Haitians.

This raises questions, from the philosophical: is there a correlation between happiness and freedom? – to the political: does transition lead to happiness? Clearly Bulgarians enjoy more freedom today than the citizens of most of the world's unhappy countries. Compared to their Western Balkan neighbours, Bulgarian leaders have done most things right in the past two decades. They kept their country out of war, pursued reforms, attracted foreign direct investment and brought Bulgaria into the European Union. Wages rose, poverty declined and there are more jobs today than a decade ago. So what explains this Bulgarian paradox?

A Bulgarian pessimist might respond by saying that Bulgaria remains the poorest EU member state, with a GDP per capita not even half of the EU average. In fact, in 2013 almost half (43 percent) of all Bulgarians faced "severe material deprivation," the highest rate in the EU. Eurostat, the statistical office of the EU, measures this deprivation by asking whether people struggle to pay rent and utility bills, can heat their homes, eat enough protein, can take a one week vacation each year or can afford a washing machine or telephone. Bulgarians have told interviewers in 40 consecutive surveys conducted since 2002 about the financial situation of their households: the number who said that things were getting better was always below one in seven. Clearly some people are desperate. Last year Bulgaria made international headlines when young people killed themselves in spectacular ways in public places. In March 2013 a young man set himself on fire in Varna to demand the resignation of the mayor. Five others did the same in early 2013. In November 2014 a woman tried to set herself ablaze outside the president's office.

Almost a quarter century has passed since Bulgarians first held democratic elections in 1990 and began their transition. Within the European Union Bulgaria has long been cited as an example to illustrate the limits of the transformative power of the EU. In 2005 the German daily Bild asked: "Isn't Bulgaria too criminalized to be a member of the EU?" In 2006 Ilja Trojanow, a German author of Bulgarian origin, argued that Bulgaria experienced a "hijacked transition", where it was impossible to "distinguish between state institutions and the mafia." As then Enlargement Commissioner Olli Rehn put it once, the EU enlargement process was supposed to be "a beacon of hope, a driver of personal freedom, and a catalyst for economic change" for poor countries like Bulgaria. Bulgaria joined the EU in 2007. And yet, today more than eight in ten Bulgarians (84 percent) tell Eurostat that corruption is widespread in their country. One tenth (11 percent) of those who had contact with institutions, political parties or companies in the past 12 months say that they were expected to pay a bribe. Bulgaria maintains an international reputation as a haven of corruption. A recent EU report pointed to "the escape from justice of convicted leaders of organised crime" and noted "there remain very few cases where crimes of corruption or organised crime have been brought to conclusion in court." Has the process of EU enlargement as a motor of change failed in Bulgaria, as the conventional wisdom in many EU capitals suggests?

In fact, the narrative of Bulgaria's failed transition, and its image as hopelessly poor, corrupt and desperate, is unconvincing. There is the economic data: GDP per capita, measured in actual purchasing power, increased from 31 percent of the EU-28 average in 2002, to 43 per cent in 2008. Bulgaria continued to make strides in economic growth, right through the 2008 economic crisis, with GDP per capita reaching 45 percent of the EU average in 2013. There is the labour market: In 2002, 56 percent of the population aged twenty to sixty-four had a job. Last year this figure was 64 percent, higher than in Italy (60 percent), and close to Poland (65 percent). Even poverty and "severe material deprivation" are not what they used to be. When this was first measured in 2006, 58 percent of Bulgarians were affected. In 2013 the number was 43 per cent. The trend is clear, and strong. Suicide rates have fallen sharply since the mid-90s and according to the most recent data of Eurostat were lower than in Denmark, the Netherlands or Austria, and in fact the lowest among all former communist members of the EU.

When it comes to corruption, Bulgaria is also less of an outlier than it seems. After all, 76 percent of respondents in the EU think that corruption is widespread in their country. So Bulgaria is close to the EU average, and ten EU member states score worse than Bulgaria. Five member states rank worse in terms of the frequency of paying bribes – Lithuania, Romania, Poland, Slovakia and Hungary. As Ivan Krastev, a Bulgarian analyst, has written "Corruption is the black myth of transition. It is the explanation of last resort for all failures and disappointments of the first post-communist decade." Corruption and the rule of law are notoriously hard to define or measure. What can be measured is the inflow of foreign direct investment (FDI) in recent years, and here the trend has also been clear. From having the lowest stock of FDI among transition economies in 1997, Bulgaria became a leader in attracting investment. Today the stock of FDI in Bulgaria is almost equivalent to its annual GDP. This is the second highest level of all former communist EU member states.

It is certain that the Bulgarian transition got off to an extremely bad start. After 1990 Bulgarians first experienced a dramatic collapse of living standards. In the winter of 1996 there was a run on banks, a collapse of the financial system and hyperinflation. Western foundations financed soup kitchens in Sofia. Comparisons between the present and the (socialist) past are a source of frustration for many of those old enough to have experienced the golden era of Bulgarian communism. In recent public opinion polls Todor Zhivkov, long-time communist ruler, is viewed positively by more than half of all Bulgarians. In 2014 two thirds of those who expressed an opinion on the matter regard the communist era as successful.

Among the younger generations in Bulgaria, on the other hand, memories of communism are few and far between. A recent survey found that 41 percent among those aged 16 to 30 could not answer the question "The fall of which wall do you connect to the fall of communism: Sofia Wall, Moscow Wall, Prague Wall, Berlin Wall?" In the same age group 94 percent say that they know nothing or only very little about the communist era. Therefore, in the case of Bulgaria's younger generations the sources of frustration and unhappiness cannot lie in comparisons to an allegedly better past. A decade ago the Centre for Liberal Strategies (CLS) in Sofia found the main source of Bulgarian pessimism instead to be "neighbour envy", when a "society focuses its attention on the country's lagging behind 'the developed countries,' rather than on the relative improvement from earlier, more unfavourable economic periods. Contrasted with those countries, the Bulgarian nation views itself as a systematic loser."

But this is not the pessimism of an apathetic society. Since 1996 Bulgarians have voted in six parliamentary elections, all judged to be free and fair by external monitors, and after every election a new prime minister was voted into office. In recent years Bulgarians have increasingly taken to the streets. There have been protests against shale gas exploration, the construction of a new nuclear power plant, amendments to the forestry law favouring the timber industry and planned construction in the "Strandzha" natural park. In early 2013 there were mass demonstrations against a rise in electricity prices and against the mayor of the coastal city of Varna. In summer 2013 tens of thousands demanded the resignation of a newly appointed head of the State Agency for National Security. Then they asked for the resignation of the whole government. Protesters blocked parliamentarians and ministers for eight hours in parliament. Students occupied the university. These anti-government protests continued until mid-2014.

What is striking is that these protests had an impact and effected change. In January 2012 the Bulgarian parliament withdrew a shale gas exploration permit issued to the American energy giant Chevron, which would have used fracking for extraction. In July 2012 parliament revoked the most controversial amendments to the forestry law. Also in 2012 Prime Minister Boyko Borisov declared the nuclear power plant project dead. In February 2014 the minister responsible for the environment suspended the natural park construction plan. Protests led to the resignation of the government in February 2013, the resignation of the Varna Mayor in March 2013 and the resignation of the new head of State Agency for National Security in June 2013. Protests also contributed to the resignation of the government in August 2014. The range of issues that move people has expanded. Evgenii Dainov, a democracy activist and political scientist, told ESI: "There used to be more important things, such as no money, no jobs, no economy. Now this society has recovered the capacity to be exited by ideas such as preserving nature."

In 2013, as Western journalists covered student protests in Sofia, some noted the same transformation of pessimism into activism. John Fetter, trying to better understand Bulgarian pessimism, quoted a student demonstrating for change: "It's been 20 years. It's the longest transition in history! I can see that young people are very disillusioned. They lack this spark. They don't feel that anything depends on them or that they can do anything to change the world." But then he noted a change, as the student continued to explain why protests have lasted for months:

"As the interview progresses, however, she indulges in a bit of cautious optimism. 'Of course, I'm not saying that everything is doom and gloom, even though I might sound like this. I'm Bulgarian after all. There are also some things that give you hope and optimism. It gives me hope, for example, to see these grassroots movements emerging little by little.'"

Thus dissatisfaction with the present turned into a motor for further change and transformation. When asked in a recent opinion poll – a quarter of a century after the end of communism – when the transition in Bulgaria will finish, less than two percent responded that it has already finished; 37 percent replied that "it will finish when we reach the EU average." And 25 percent said that it would never finish.

Adam Smith wrote about hope, deception and change three centuries ago: "The pleasures of wealth and greatness… strike the imagination as something grand and beautiful and noble, of which the attainment is well worth all the toil and anxiety which we are so apt to bestow upon it… It is this deception which rouses and keeps in continual motion the industry of mankind." As Georgy Ganev, a Bulgarian economist at CLS explains, "Once a Moskvitch was better than a Trabant or a Zaporozhets. Now an Opel is much worse than a BMW." This is unlikely to change any time soon. For now, there is still a lot of life left in Bulgarian pessimism.