"On the brink of victory" - Viktor Orban, rhetorical poison and a vision of hell 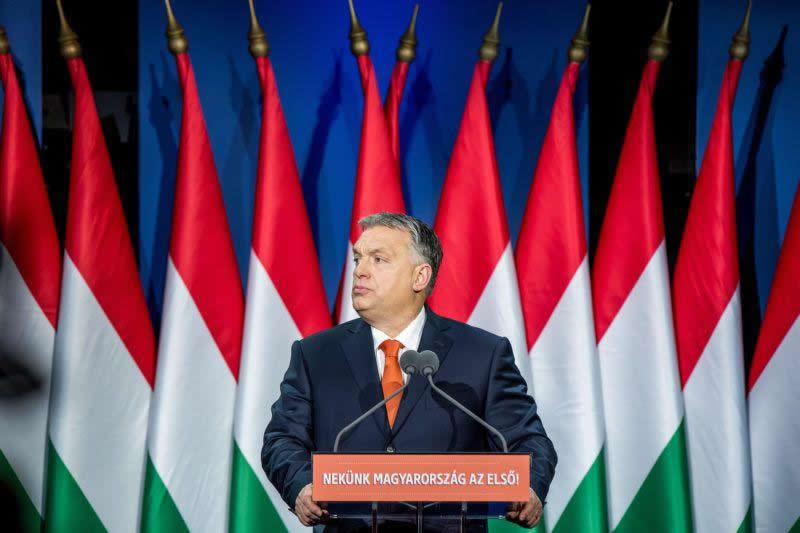 The full paper is available in PDF format.

It is a carefully crafted speech by a master orator, delivered in February 2018 a few weeks before the recent Hungarian elections. It expresses a vision of politics that combines vivid images, wit and aggression. It mixes hot and cold: one moment the speaker is reflective and self-deprecating; the next he is flaunting his amazing achievements and his unmatched ability to understand the secret forces shaping world history.

Two passages in this speech stand out. One is an appeal to (Western) Europeans, calling on them to "reverse" the presence of Muslims in their cities:

"Day by day their cultural foundations are being transformed, the population raised in a Christian culture is declining, and the major cities are undergoing Islamisation. And I have to say that I cannot see the political forces with the will and ability to stop these processes – let alone, horribile dictu, reverse them."

This is a call to ethnic cleansing. No wonder that the first to congratulate Orban following his election victory in April were Europe's racist and far-right parties.

The other passage is an open threat to his Hungarian critics:

"it is a clear testament to the Hungarian people's generosity and deep tolerance that the people who are scheming to implement this plan can safely and cheerfully live their lives among us."

How long will this "deep tolerance" prevail? Not much longer, if Orban's vision of an illiberal Europe becomes reality. He goes on to say: "Now of course we shall not look on impassively; we are not sheep, who quietly stand around waiting for their fate to be visited upon them. Naturally we shall fight … and if somebody does not refrain from their dangerous plans we shall simply expel them."

Orban knows: political success depends on memorable and sticky stories, repeated often. While Hungary accounts for only 1 percent of the GDP of the EU and 2 percent of its population, Orban has managed to turn himself into a global brand of political success; a man who created a party 30 years ago, who has been prime minister for 12 of those years and is likely to be the longest serving prime minister in the EU when his current term ends in 2022. Orban is no shadowy, dark force like J. K. Rowling's Voldemort. Rather, he is Mephistopheles: an erudite, persuasive wizard who coaxes European centre-right parties to hand him their soul.

Reading Orban's speech in full one sees how skilfully he changes mood. He builds up to a crescendo, moving from images of ordinary life – the farm, the cinema, the bicycle path to a family home – to a dramatic show-down between good and evil. At that moment his jargon becomes militaristic, and Orban turns into a warrior leader of honest citizens who refuse to be the sheep led to their slaughter, and who are forced to pick up arms to defend their homeland. For Orban, as for Dante, the deepest circle of hell is reserved for traitors: here those among his compatriots who sell their soul to serve evil foreign masters and who want to destroy the way of life of ordinary Hungarians.