Mr Robert WALTER, Head of the UK delegation to PACE

Mr Jordi XUCLÀ, Chairperson of the ALDE group in PACE

PDF version of this open letter

Last year you cast a fateful vote in the meeting of the Parliamentary Assembly of the Council of Europe. In January 2013 you voted down a draft resolution by the rapporteur on political prisoners in Azerbaijan, appointed by your Assembly in 2009. His resolution was defeated by 125 to 79 votes.

This resolution warned that the issue of political prisoners in Azerbaijan had not yet been resolved. It pointed out that "politicians and activists linked to the opposition, as well as journalists, bloggers, and peaceful protesters" continue to be imprisoned in Azerbaijan and that this is a systemic problem.

This vote in PACE sent a very unfortunate signal to the authorities in Azerbaijan.

On 26 December 2012, in anticipation of the PACE vote, the president of Azerbaijan amnestied some political prisoners. With the resolution rejected, and no new rapporteur appointed, a wave of new arrests started.

Many human rights organisations had warned that this might happen. So had members of PACE who had supported the draft resolution. As Viola von Cramon-Taubadel (Germany) stated:

"A revolving door policy is being used as a tactic to silence independent journalists. It is a cat-and-mouse game, in which they are arrested, released and then re-arrested shortly afterwards. Everybody clearly knows that next time it could be them."

Not all votes in PACE have immediate consequences. This one did. It even led to the arrest of the very people the Council of Europe had relied on and worked with in Azerbaijan. 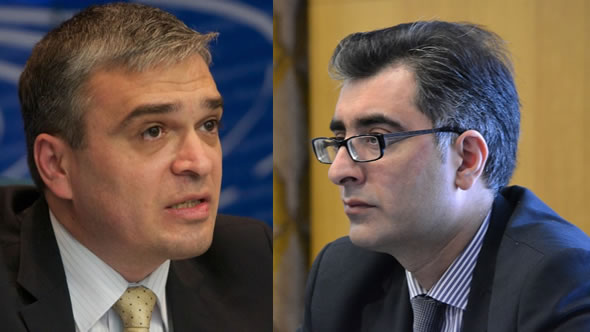 You have probably heard about the case of Ilgar Mammadov, an opposition party leader and director of the Council of Europe's Political Studies Programme in Baku; you might know about Anar Mammadli, chairman of a leading election observation group, who had advised the PACE rapporteur on political prisoners. They both put their faith in the Council of Europe. They were both arrested in 2013. Mammadov was sentenced to seven years in prison in March this year. Mammadli's trial began on 21 April 2014. It was as if the authorities in Baku decided to put their finger into the eye of PACE.

The police also arrested dozens of young people between January and May 2013. They had protested against non-combat soldier deaths in the armed forces. Some of them were charged with illegal arms possession and plotting mass disorder. Seven of them are members of NIDA, a pro-democracy youth organisation. One is a member of the Free Youth Movement. They are facing prison terms between 6.5 and 8.5 years.

Now eight young imprisoned activists, aged 18 to 30, have started a hunger strike. They risk their health, perhaps their lives. This could have been avoided. It can still be avoided.

We hope that you realise by now that your vote in January 2013 was a mistake. That it was a mistake to trust this repressive regime. And that the human costs of this mistake are high and the risks are growing.
All eight youth activists, as well as Mammadli and Mammadov, have been recognized as prisoners of conscience by Amnesty International.

We call on you, in light of the dramatic deterioration of the situation in Azerbaijan and the hunger strike of these young people, to make an effort to correct the consequences of this decision now.
Specifically, we hope you consider doing the following:

Here is the bitter irony: as Azerbaijan prepares to assume the chair of the Committee of Ministers of the Council of Europe, it has never had more political prisoners than right now. There are many more political prisoners in Azerbaijan today than these ten. There should not be any in a Council of Europe member state. PACE, since January 2013, has so far turned its eyes away. We hope you can help us change this, before it is too late.