Getting results? How muddled thinking prolongs the refugee crisis 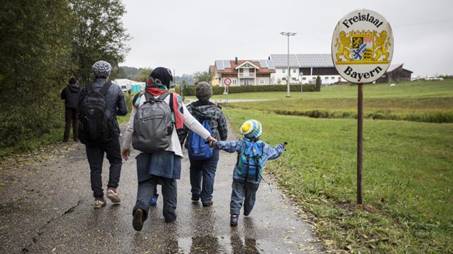 On 24 November 2015, the Swedish government announced measures to reduce numbers of incoming refugees. "It pains me that Sweden is no longer capable of receiving asylum seekers at the high level we do today," Prime Minister Stefan Löfven said. From next spring, most refugees will receive only temporary residence permits. Sweden is expecting as many as 190,000 refugees arriving in 2015.

On 8 December 2015, Bavarian authorities reported that they had registered the millionth refugee arriving in Germany in 2015. Data released by the German Interior Ministry confirmed this: nine days earlier, 965,000 refugees had been recorded in the computer system, which manages distribution of refugees throughout the country.

At the congress of her party on 14 December 2015, Chancellor Angela Merkel strongly defended her refugee policy: "We stand by our humanitarian responsibility … This is a historic test for Europe … It is a part of the identity of our country to do great things." Yet Merkel also repeated that the influx of refugees in 2016 had to be reduced, so as not to overwhelm German society.

Angela Merkel was the first European leader to argue for a deal with Turkey to move from the currently chaotic to an orderly process of offering refugees protection. In a joint article at the end of November, German Vice Chancellor Sigmar Gabriel and Foreign Minister Frank-Walter Steinmeier also argued for this:

"If Turkey is ready to make a big contribution to securing the common border with the EU and, at the same time, will readmit refugees who try crossing that border, then the European Union has to actively support Turkey in return … then Germany should – in return – resettle contingents of Syrian refugees within the framework of a European effort as it already did in the case of other civil wars. The people in these contingents shall be safely brought to Europe and Germany … This procedure will increase control over who is coming to our country because claiming asylum, identity verification, and registration are all being done before immigration. At the same time this means that people who are seeking protection do not need to take the perilous route through the Mediterranean and the Balkans. Nobody should risk their lives trying to reach Europe. This is an ambitious standard, but it must not be lower."

ESI presented similar ideas three months ago and developed them further in early October (see The Merkel Plan – A proposal for the Syrian refugee crisis). And yet, while this consensus is reassuring, there are huge problems when it comes to actual implementation. It is the devil in the details of various proposals that really matters now. 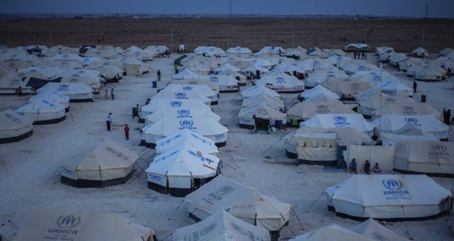 How resettlement will not work

In recent days, the European Commission has prepared its proposal for what it calls "a voluntary humanitarian resettlement scheme." This is due to be approved by the College of Commissioners on Tuesday 15 December. It follows on from a series of meetings that began with Sherpas – personal representatives appointed by the EU heads of state or government of some member states – coming together on 4 December.

This proposal has so many flaws that it is likely to kill the flagship resettlement project that Berlin has put its hopes on. It also sends a very bad signal to two other important audiences: Turkey and Syrian refugees.

The Commission recommends a process that should be "rapid", "flexible" and "efficient". This is deceptive. For the Commission "flexible" means "to take into account the sustainable reduction of numbers of persons irregularly crossing the border from Turkey into the European Union as a result of Turkey's actions". The reasoning behind this is explained in detail:

"If the participating states arrive at the common conclusion that there is no substantial reduction in the number of persons irregularly crossing the border from Turkey into the European Union, they could decide to suspend ex nunc the implementation of the scheme or adopt the numbers accordingly."

This reflects deep distrust of Turkey in Brussels. At the same time, it will only increase distrust in Ankara. After all, if numbers decline, EU countries can attribute it to something other than Turkey's actions (for instance to the weather, or the  EU's own actions); or declare the reduction to be temporary instead of "sustainable". The basic idea is that Turkey has to act first; and the EU waits to see if Turkey's actions are good enough before committing itself.

This is not the only problem. The Commission also proposes that, "given the globally acknowledged expertise of the United Nations High Commissioner for Refugees (UNHCR) in … resettlement and humanitarian admission programmes, UNHCR should be called upon to play this role in relation to this scheme". The Commission then states:

"The processing capacity of the UNHCR should be taken into account as a reference point in the implementation of this scheme. Currently UNHCR has globally the capacity to process 80,000 predominantly resettlement cases."

However, if UNHCR's global resettlement capacity is 80,000, how many can it resettle from Turkey: 10,000 or 50,000 in one year? Such numbers are very small compared to the more than 2 million registered refugees in Turkey and the 1 million refugees that have already reached Germany in 2015.

As a first step, the European Asylum Support Office (EASO) "in close collaboration with the Commission, participating states, UNHCR and IOM" should develop standardised criteria and procedures related to the admission procedure. This procedure should include a series of checks: identity, prior registration in Turkey, qualification for refugee status, security, medical, vulnerability and possibly family links in the receiving state. The Commission anticipates needing one month after the adoption of the Recommendation for the elaboration of these criteria and procedures. It could easily take longer.

The Commission then emphasises that "the admission procedure should be concluded as soon as possible and in any case within six months." In this case resettling a small numbers of refugees might happen in early autumn 2016.

The signal this sends to the world is simple: the EU is preparing to hide behind UNHCR and its "processing capacity." After the recent failure of the EU to implement the relocation of refugees within the EU (so far 184 refugees out of more than 100,000 have been resettled, in three months), everything is set up to fail a second time.

However, if Turkey does not make a huge effort, based on the experience this year new arrivals could well number 1 to 1.5 million people by next autumn. What will the EU do then?

How readmission will not work

Strangely, the EU has also failed to engage seriously with a proposal that is not only essential to an agreement with Turkey, but would also directly benefit EU countries: the readmission of migrants from Greece to Turkey.

For years, Turkey was reluctant to accept readmission requests from Greece. This year, however, it has started to accept more requests, as this is also a condition for visa-free travel. However, Greece has sent a fairly low number of requests (8,700), and even in the cases that Turkey accepted (2,400), Greece has not been able to return the migrants, as most of them have moved on from Greek territory before their cases are resolved. In the end, only 8 individuals have been readmitted to Turkey.

If the EU is serious about making readmission work, it must help Greece increase it capacity to file readmission requests and return accepted migrants to Turkey. So far, no new efforts have been made in this regard.

The EU-Turkey readmission agreement, mentioned in the EU-Turkey deal reached on 29 November, is less relevant. It requires that persons to whom it is applied "illegally and directly entered the territory of the Member States after having stayed on, or transited through, the territory of Turkey". Yet most refugees enter the EU "directly" from Serbia, not Turkey. 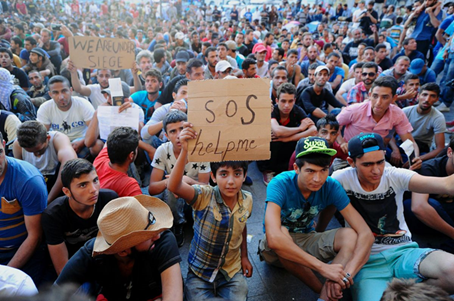 Why the EU-Turkey deal must work

Turkey is indispensable to any solution. The EU's external borders cannot be "defended" against refugees. Under international and EU law, any foreigner reaching EU territory has a right to request asylum and to be then allowed entry so that this request can be examined. As a result, Greece cannot send refugees away. Blaming Greece for the influx is therefore wrong, and demands for "better" border control are misplaced. An EU border guard would make no difference here – better control would not mean lower numbers. Building "a fence" on water is also no solution. Greece would remain legally obliged to rescue refugees in distress at sea.

As we outlined in a recent paper – Berlin Initiative – Resolving the Aegean refugee crisis in early 2016 – the EU is asking Turkey to do two things which are both costly and unpopular:

The EU-Turkey deal was weak to begin with (see our post-Summit paper: The devil in the details). The discussions in the EU afterwards raise further doubts about the EU's commitment.

At this moment, the additional €3 billion the EU has promised to spend on refugees in Turkey has not yet been identified. EU member states are haggling over whether to take the money from the EU budget, or to make voluntary or mandatory contributions. Member states have also expressed disagreement on when and under which conditions to lift the visa requirements for Turkish travellers in 2016. This was left vague in the Summit paper: it should happen "by October 2016" or "once the requirements of the [Visa] Roadmap are met."

The EU and member states have to reassure Ankara that they are serious about delivering on the key commitments in 2016: to resettle significant numbers of Syrian refugees from Turkey; to mobilise and spend new funds that will make a difference to the situation of refugees; and to lift the visa requirement for Turkish citizens.

To change the current dynamic in the Aegean, it is essential to show real results already in the first four months of 2016. 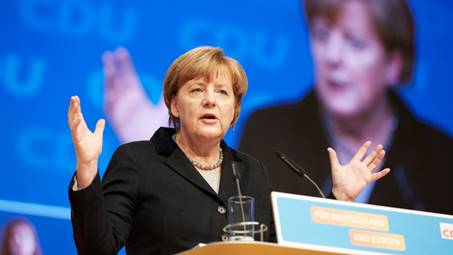 For more on how this could be done administratively, and why there is no need at all to involve UNHCR or the EU in this pilot phase, please see: Berlin Initiative – Resolving the Aegean refugee crisis in early 2016.

Turkey should commit to readmit, without delay, every migrant including asylum seekers who reach Greek islands after 15 January 2016. To this end, Turkey would need to fully implement the 2013 Law on Foreigners and International Protection immediately, so that the returned migrants can enjoy full protection in Turkey. Then Greece can consider Turkey a safe third country (for refugees) by 15 January 2016.

For more on how this could be done, see: Turkey as a "Safe Third Country" for Greece.

In return for Turkey's cooperation, the European Commission should begin right away the process of lifting the Schengen visa requirement for Turkey. This legal process lasts a few months. It should hold out a concrete promise to Turkish citizens:

"If Turkey implements the existing readmission agreement with Greece in full and agrees to take back all new arrivals to Greece from 1 January 2016, and if it implements a concrete set of other priority conditions from the roadmap until March, then Turkish citizens will be able to travel without a visa to the EU from April 2016."

If this readmission to Turkey proceeds as planned, the Justice and Home Affairs Council and the European Parliament could vote in March in favour of lifting the visa requirement for Turkish citizens. The decision can then become effective in April 2016.

ESI on nuts and bolts of the refugee issue

ESI was invited to speak at a conference organised by the European Parliament in Brussels on the "European future of Bosnia and Herzegovina – 20 years after Dayton-Paris Peace Agreement". You can watch the 8-minute presentation here: 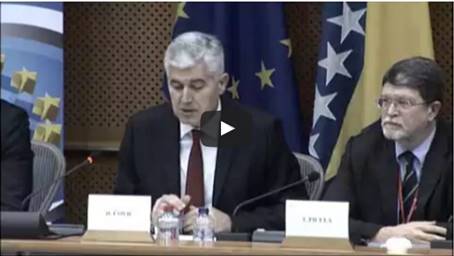 The conference was attended by Dragan Čović, Bakir Izetbegović, Federica Mogherini, Johannes Hahn, Lars-Gunnar Wigemark and Elmar Brok. New ESI reports on Bosnia and the EU will follow before the end of the year. 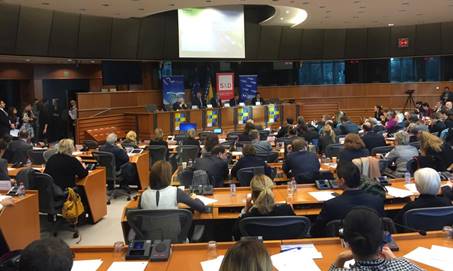