Warsaw – Support for ESI-Batory proposal regarding the rule of law in Poland: Lech Walesa and others 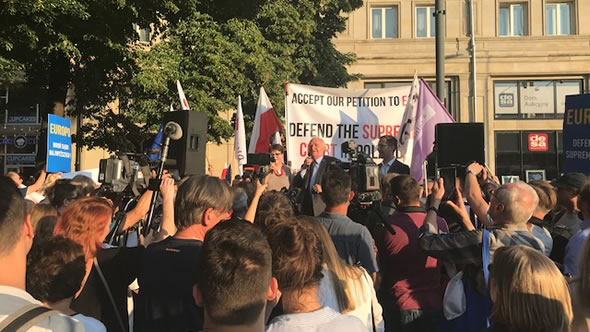 ESI-Batory paper: European tragedy – the collapse of Poland's Rule of law (29 May 2018)

"The Polish citizens have fought hard to gain democracy and a fair and independent judiciary system. In these difficult times, the European Union needs to stand by its own citizens in Poland and protect the rule of law. Therefore, we, the undersigned, urge you to do whatever possible to protect the independence of the judiciary in Poland. In particular, we urge you to immediately start an infringement procedure, in parallel to the Article 7 procedure, and refer the Polish Supreme Court Act to the European Court of Justice to stop the detrimental reform as soon as possible."

"The Association of Judges "Themis" fully supports the conclusions of the report stating that the independence of the judiciary in Poland is endangered to such an extent that immediate measures at any possible level are urgently required."

"We are Polish artists and scientists, but first and foremost we are Polish and European patriots who above all cherish values, which every democratic community must be based on – freedom, rule of law, equality, human rights. We fought for them. Today, they are under serious threat. The actions of the Polish authorities constitute an assault on the separation of powers and independence of the judiciary – the main pillar of civil rights. It is taking place inside the legal territory of our European Union and will inevitably have dramatic consequences, both for our country as well as for the integrity of the entire Union.

It is our opinion, shared by many distinguished Polish and international experts, that the actions of the ruling party in many areas violate the Polish Constitution. Unfortunately, the Constitutional Tribunal that would have been able to evaluate this and bring it to a stop has already been taken over and incapacitated by the current authorities.

For this reason, like President Lech Wałęsa, we voice our support for the European Union with regard to the current proceedings taking place before the Court of Justice of the EU on the matter of the Polish Law on Ordinary Courts and we are impatiently awaiting the Court's verdict.

The history of our continent teaches us that when the foundations of our common liberties are demolished, their restoration becomes extremely difficult."