Berlin – Meetings on Russia's membership of the Council of Europe 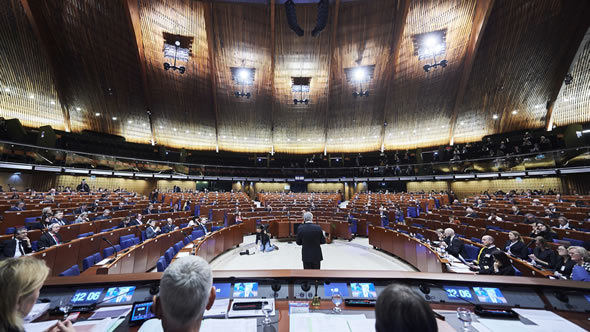 ESI's Senior Analyst Alexandra Stiglmayer participated in a series of meetings in Berlin on the topic of Russia's membership of the Council of Europe in Berlin. She met the Advocacy Group of the EU-Russia Civil Society Forum and then, with the Russian NGOs, German MPs and officials of the Foreign Ministry.

In the talks, Alexandra pointed out that Russia was blackmailing the Council of Europe by withholding payment of its membership contributions (33 million Euro per year) since July 2017. It has been boycotting the Council's Parliamentary Assembly (PACE) and making its return dependent on a change of PACE's Rules of Procedure that would make suspensions of the voting rights of national delegations difficult. Russia also demands that this sanction is softened by allowing participation in the votes for judges of the European Court of Human Rights, for the Council's Secretary-General, the Human Rights Commissioners and other senior posts. PACE suspended the voting rights of the Russian delegation in 2014 after the annexation of Crimea.

Alexandra said that other Council of Europe member states should fill the budget gap created by Russia and insist that Russia pays its debts and returns to PACE before its demands are discussed. She warned of giving in to Russia's blackmail since this would damage the credibility of the Council of Europe and lead to more blackmail in the future. It would also weaken PACE, which has used the instrument of suspending the voting rights of a national delegation very cautiously, only four times in its history (against Greece in 1969, Turkey in 1981, Russia over Chechnya in 2000, and Russia in 2014).