Paris – Meetings on European foreign policy and "The Malta Plan" 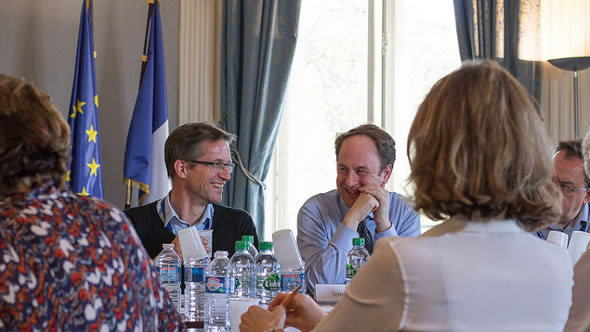 The meeting covered Europe's international agenda and key external partnerships against the backdrop of major elections and transitions of government in Europe and the United States. The debate focused particularly on the practical implications of more flexibility in European integration and the future of the EU after Brexit. Representatives from the French and German foreign ministries and the European External Action Service, journalists, and think tank experts from across Europe contributed to the discussions.

While in Paris, Gerald also met with senior advisers of the Socialist Party and the En Marche movement to present ESI's policy proposal "The Malta Plan" which argues that the European Union urgently needs a credible European policy on asylum and border management which combines control of external sea borders with respect for international refugee law. It must respect the ethical norm of the rule of rescue: do not push individuals in need into danger. This is the heart of the UN Refugee Convention (non-refoulement). The current EU presidency (Malta) should build consensus for a concrete proposal before this summer. A new system should replace the current Dublin procedures whose reform is debated in the EU with little prospect for a successful outcome.

Together with Manuel Lafont Rapnouil, the head of ECFR Paris, he recorded a podcast on the current state of the refugee crisis and what needs to be done next.