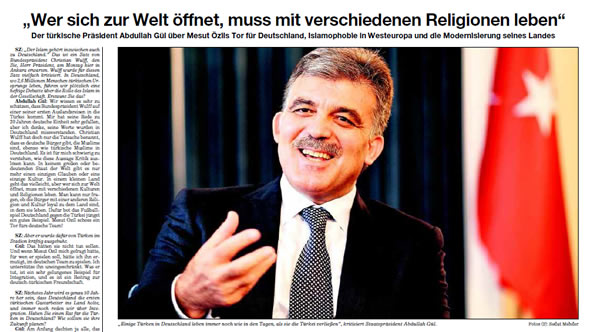 Turkish president Abdullah Gul gave a long interview to the German quality daily Süddeutsche Zeitung in which he commented, among other topics, on the current debate on integration in Germany, on Islamophobia, Turkish EU accession, and, referring to ESI, the "Islamic Calvinists" in the central Anatolian town of Kayseri. Abdullah Gul is a native of Kayseri himself and when ESI published its report on "Islamic Calvinists. Change and Conservatism in Central Anatolia" in 2005, he stated in the Turkish daily Hürriyet: "The name of this concept is Calvinism in Christianity. In different religions it has different names. They compare the sociological situation in Kayseri to this. They explain it in this way. It is very true." Since 2005, media from all over the world have referred to this report.

Please find below quotes from the interview in Süddeutsche Zeitung in English translation:

On integration problems of Turks in Germany

I am sure that many things will change in the near future, because language was one of the major resources lacking. If you do not speak the language of the country you are living in, this won't be useful for anybody: not for the individual person, not for the country, not for society. That's why I repeat at every occasion that they should learn German; fluently and without accent. This must begin in kindergarten, but of course opportunities for that have to be created, too.

The majority of people live together peacefully. But it is true, tensions are being created. It's like a disease that breaks out from time to time, regardless of education or wealth in a society. This disease can come in the form of anti-semitism, Islamophobia or racism. In such a case, politicians and intellectuals should do something about it.

On whether Turkey still needs the EU

Yes, we do have a strategic objective. We want to transform our country and democratize it further. It is important to remember that Turkey will not automatically become a member. We can only join if we have reached the level of the EU member states. In addition, there will be referenda in a number of countries. At the end of this process the Turkish people might say no as the Norwegians did. In this case, there would be no full membership. That is also a reason why it wouldn't be good to slow down the process.

On the deadlock in Turkish-Armenian rapprochement:

If it would help, I would visit Armenia for another football match. I've got enough self-confidence for that. But complicated processes cannot be solved in an instant.

The role of each institution will be reviewed in our democratization process. The relationship between the military and civil society has been redefined. Our National Security Council, for example, used to have a different structure, but today it is subordinate to the civilian leadership. Also the military courts now have a different role.

On Kayseri and "Islamic calvinism" (ESI)

We often hear from our guests: Yes, we were in Istanbul and Ankara and we liked it there, but what about the rest of Turkey? Kayseri is located exactly in the middle of our country. Those who have seen the city have a more complete picture of Anatolia. Kayseri became known for what a German think tank has labeled "Islamic Calvinism”, referring to its special economic diligence and its entrepreneurial spirit. Kayseri is also a very beautiful city. I am proud of it.