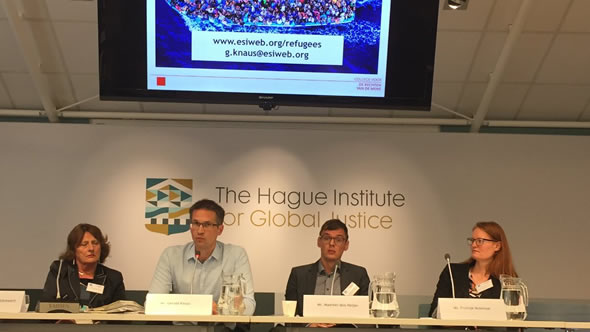 ESI's Gerald Knaus was invited to speak at the conference "Human Act or Devil’s Pact? Human rights aspects of migration agreements between EU and third countries" which the Netherlands Institute for Human Rights organized on the afternoon of 18 May 2017 in cooperation with the Meijers Committee at the Hague Institute for Global Justice in The Hague.

He spoke at a panel on EU migration agreements with third countries and pointed out that Europe is in fact facing several crises. The number of migrants drowning in the Mediterranean is still rising. Greece and Italy are overburdened with arrivals and conditions for refugees are often unacceptable. The Dublin system is failing. And anti-islam, anti-EU and anti-refugee sentiments connected to the migration crisis are influencing policy. While an agreement with Turkey was the right way to go, agreements with countries like Libya are unacceptable, when there are no or unstable governments to deal with. However, there is a moral, political, and legal obligation to save people at sea. He emphasised that policies need to preserve the Schengen agreement, protect migrants, and strengthen relations with Africa. Most importantly, the EU needs to negotiate readmission agreements with countries of origin, not countries of transit, as they may not want to take back non-nationals.

Only those whose asylum application got rejected may be returned. If these returns are executed quickly, it will be a deterrent for migration. At the same time readmission agreements need to be accompanied by an increase in legal possibilities to enter Europe, such as work or student visas. This will further reduce people smuggling and unsafe passage via the Mediterranean. Europe should link these agreements to development aid. Italy needs to supported to improve asylum procedures to last eight days with one week for appeal. Dublin will never work, so it should be dismissed. Equally, Greece is in need for more support to be able to treat migrant in a dignified manner. It is unacceptable to leave people in tents during winter. Furthermore, a European project at the external borders is necessary. And last but not least, in order to win the argument for increased resettlement to EU Member States, Gerald proposed an EU representative on migration from a country with a credible track record when it comes to treating migrants and adequate resources.