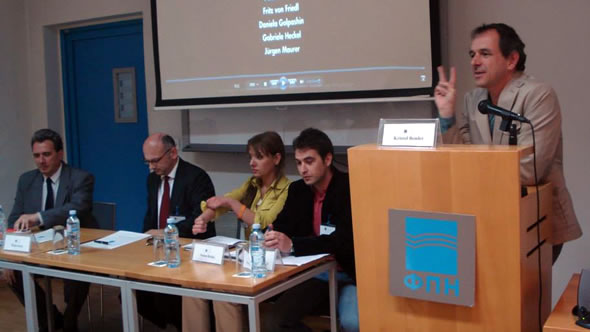 ESI's Kristof Bender participated in a conference on regional effects of Croatia's accession to the EU ("Regionalne posledice pristupanja Hrvatske EU") in Belgrade. The event, taking place on 17 and 18 May 2013, was organised by the Centre for Interdisciplinary Balkan Studies (CisBalk) of the Faculty of Political Sciences of Belgrade University (FPN) and the Center for Applied European Studies (CPES) from Belgrade.

The event started with a screening of the ESI documentary "Twilight of Heroes - Croatia, Europe and the International Tribunal", followed by a discussion with Dejan Jovic (Faculty of Political Sciences Zagreb), Ivona Hrelja and Mateja Stankovic, both students of the international master programme South East Europe at the FPN Belgrade), and Kristof.

Kristof also talked on the first panel with Jovan Teokarevic (head of CisBalk at FPN, Belgrade), Senada Selo-Sabic (IRMO, Zagreb), and Vladimir Gligorov (WIIW, Vienna), chaired by Predrag Simic (FPN, Belgrade). With other panelists focusing on the status of enlargement process in the Balkans, Kristof focused on sketching two ideas what friends of EU enlargement in the Balkans can do in the current circumstances. Here is a summary of his arguments:

EU enlargement in the Balkans: what now?

The basic parameters for future EU enlargement in South Eastern Europe are clear: As European leaders are pre-occupied with economic problems and related political challenges, the enlargement process will become, if anything, even tougher. The Western Balkan countries will have to show that they are serious, committed and willing to reform. If doubts emerge (as with Macedonia after police cleared opposition MPs from the parliament last December), it will mean no progress on the way towards membership. The "historical imperative" of bringing the unification of Europe to a conclusion is not a factor any more.

Croatia and Montenegro have shown that progress – and even attaining membership – in these conditions is possible. But it is tough and often requires difficult political decisions.

What can friends of EU enlargement now do in these circumstances? What shall those who think progress towards EU membership is crucial for the future of the Western Balkans and for Europe push for? This short article sketches two ideas.

One is to push the EU for more clarity about expectations and rewards.

The most urgent example for this is the upcoming parliamentary election in Albania. The European Commission's 2010 Opinion on Albania's EU application listed twelve reform priorities. Two relate to elections. Albania must modify its electoral legislation in accordance with OSCE recommendations, and it must ensure that its elections are conducted "in line with European and international standards."

The first condition has been largely met. A revised electoral code, passed in July 2012 with broad support, addressed most of the recommendations. There are growing concerns about the second criteria, however.

In early April a member of the Central Election Commission (CEC) was removed from the commission by parliamentary majority, but in violation of Albania's election legislation.

It is clear that these elections will be tight. There will be controversies and complaints. In the absence of a credible, impartial and legitimate CEC, this election is going to end up in a bitter dispute. Whoever will be the eventual victor, the loser is going to be Albanian democracy and its prospects for European integration.

The EU should now send a clear message that all Albanian institutions must rigorously respect the rules they themselves have adopted. Spelling out a few red lines in advance makes it less likely that they will be crossed. They should include that members of the election administration cannot be removed for reasons unspecified in the Election Code. Also, counting and adjudication of complaints and appeals, both particularly important if elections are expected to be decided by small margins, must be done through strict observation of procedures specified in the Election Code.

By taking a clear position now, and insisting on a reversal of the decision to dismiss a member of the CEC who had been appointed for six years, the EU increases the likelihood that such red lines will not be crossed. It would raise the likelihood of these elections meeting international and European standards. A repeat of the 2009 experience, with contested elections followed by a major political crisis, on the other hand, would mean no candidate status and no membership negotiations.

More clarity on expectations and related rewards would be desirable also with regard to Serbia and Kosovo. The Serbian leadership has taken courageous decisions with the initialising of the Belgrade-Pristina agreement. It should be clear that if it carries through the undertaken obligations it would be rewarded with a date for the start of negotiations by the end of June. This seems likely, but question marks remain. Clear and unambiguous messages would make it easier for local politicians to carry through brave political decisions.

Also Kosovo's leaders have made courageous decisions related to the agreement. The European Commission has proposed to open talks for a Stabilisation and Association Agreement (SAP) with Kosovo. Given the particular situation of five EU members not recognising Kosovo as an independent state, it remains unclear how such a Stabilisation and Association Process for Kosovo would look like in practice and if the five non-recognisers would support a genuine SAP. A failure of the EU to deliver on the Commission's recommendation would send a terrible signal. It would seriously weaken Kosovo's reformers and further undermine the EU's already limited influence.

The second idea relates to the question how existing tools can be applied more effectively.

It is clear that there will be no "new model" or new approach by the EU towards the Balkans. In the current circumstances, EU member states are unlikely to find agreement for any major changes. The only realistic option is some fine-tuning of existing tools.

There are five basic elements that turned the accession process of the 5th enlargement round into a genuine motor for reform: clear criteria, constant monitoring, competition between applicants, targeted assistance, and a tangible credible reward.

The full transformative power of this approach is unleashed when a country is negotiating, ideally with other countries in the same process at the same time: Screening for all chapters provides a very clear outline of all the tasks that have to be met. Negotiating countries are more intensively monitored. In addition to the annual reports there are also peer reviews, consultancy reports on specific issues commissioned by the Commission, and the whole documentation related to the opening and closing of negotiation chapters. If more countries negotiate there automatically is competition. This helps civil society, media and opposition groups to put pressure for reform on their governments simply through comparisons to more successful candidates. EU assistance is targeted to the implementation of policies related to the acquis. And there is a clear tangible goal: EU membership.

For the majority of Western Balkan countries, those that are not negotiating (yet), the situation is very different. The tasks ahead are not yet as scrupulously defined as through screening. There is – except for the annual reports – not much monitoring. There is no direct competition in the process, resulting in little pressure on laggards such as Bosnia and Herzegovina, as these countries do not visibly fall much behind. There is little debate about the use of EU assistance. And the credibility of the reward of EU membership is widely questioned.

If Montenegro is joined by another two or three countries in the negotiation process, this would change the overall dynamic of the enlargement process in South Eastern Europe, having a mobilising potential also for the laggards. But this is unlikely.

Here are a few ideas how the EU and supportive member states could strengthen the incentive structures even before accession talks start.

The commission should chose one or a few key chapters, such as environment, regional development or rural development, and try to push as far as possible before the formal start of negotiations. A look at the experience of Croatia shows that in many key chapters many or even most of the reforms were done before the actual opening of the respective negotiating chapter. There is no substantive reason why this cannot happen also in countries that are not yet formally negotiating. Moving in this direction would involve the following steps.

First, the European Commission to conduct an informal, but full screening on the respective chapter(s) with all West Balkan countries.

Second, the Commission to make more information on progress in the respective chapter(s) publicly available. The Commission itself will not (and does not need to) rate or compare countries, but should provide enough information to allow NGOs to do this effectively.

Third, to include all West Balkan countries, and provide enough information to compare performance. This will lead to healthy competition.

Fourth, to target assistance on the respective chapter(s). Ideally this would be done by adapting the IPA [Instrument for Pre-Accession Assistance] regulation (new draft currently in procedure). This would be most effective, if funding was allocated to the chosen chapters, rather than to countries, and distributed on a competitive basis. Countries making progress would get considerably more funding than those who fail to do so. Individual countries, including Balkan-friendly non-EU members like Norway, Switzerland or the United States, could also target (part of) their assistance respectively.

Such targeted aid would, fifth, constitute some sort of tangible reward. Countries undertaking reforms would receive funds for expensive European policies and related infrastructure that play an important part in the accession process.

More importantly, however, a more transparent and competitive process in itself would strengthen incentives for reform. Civil society organisations and media would have an important role in exerting pressure and – if necessary – exposing lacking commitment of their governments.