Athens – ESI at seminar on refugees, migration, and the future of EU-Turkey relations 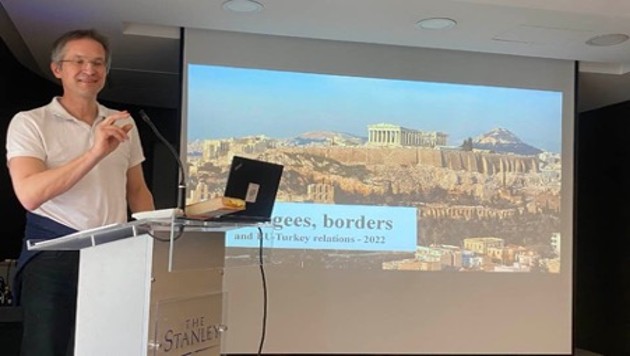 ESI’s Gerald Knaus was invited to give a presentation on “Refugees, migration and the future of the EU-Turkey Relations” at the Seminar of Journalists organised by the Friedrich Ebert Stiftung in Athens.

In his presentation, Gerald spoke about the EU’s refugee policy and its relationship with Turkey, that has taken in almost four million refugees. Gerald argued that the EU is conducting illegal pushbacks at its external borders, in Poland, Greece and Croatia, which has dramatically damaged the EU’s credibility.

Gerald stressed that a renewed commitment reached between the EU and Turkey is urgently needed that could ensure the next decade humane control of irregular migration in the Aegean in line with the UN Refugee Convention. Furthermore, it would chart a way towards a sustainable asylum and border policy for the whole Mediterranean in 2022, in the interest of both Turkey and the EU.