Rheinfelden – ESI presentation on asylum and migration: how to face to the global challenge 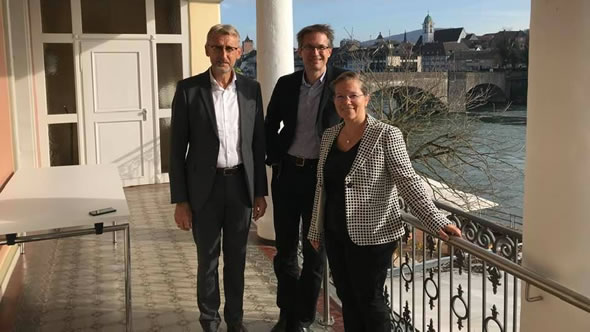 ESI's Gerald Knaus was invited to the town of Rheinfelden in Baden-Württemberg by the CDU MP Armin Schuster, for a public presentation on asylum and migration policy. Gerald's presentation was followed by a debate with MP Schuster, moderated by Diana Stöcker, the mayor of Rheinfelden.

On the following day, mayor Stöcker took Gerald on a tour of the three refuge centres in the region. Together with MP Schuster, they also visited the Swiss-French-German border near Basel on the Rhine. Gerald used this to look for practical lessons for the Western Balkans; the experience of federal police, of national and local politicians, studying abandoned border crossings and new bridges, cooperation of police and fire brigades. All in a region, where the notion of doing away with Schengen seems absurd, and practically close to impossible.

Gerald also met with several Gambians working in the hotel and gastronomy sector whose residence status, however, is unsecure.