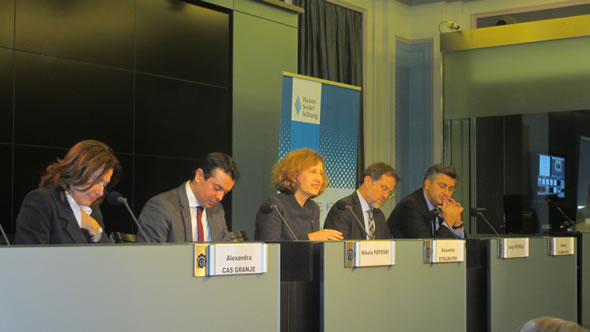 ESI Senior Analyst Alexandra Stiglmayer moderated a discussion on "EU, Western Balkans and Regional Stability" with a focus on Macedonia, which was organised by the Hanns-Seidel-Stiftung in Brussels. On the panel were Nikola Poposki, Macedonia's Foreign Minister; Alexandra Cas Cranje, Director for Western Balkan countries at the European Commission's Directorate-General for Enlargement; MEP Alojz Peterle, Chair of the EP's Delegation to the EU-Macedonia Joint Parliamentary Committee; and MEP Andrej Plenkovic, Vice-Chair of the EP's Foreign Affairs Committee.

The discussion evolved around where Macedonia stood in the enlargement process – with Foreign Minister Poposki noting progress and continued strong commitment to EU accession, while Ms Cas-Cranje said Macedonia was backsliding on some political criteria, in particular media freedom and independence of the judiciary. All participants agreed that Greece's blockade of the start of accession negotiations due to the name dispute between the two countries was a major problem. ESI developed a proposal how to resolve the name issue already in 2012. Ms Cas-Cranje also mentioned the Commission's new focus on the economy, which was necessary since the Western Balkan countries had to develop their economies before they could join the EU. Alexandra said that a new approach to monitoring and evaluating progress in the accession process, which should be based on an elaboration of the key requirements and assessment criteria for each chapter of the acquis, could help reveal more clearly where Macedonia stood in the process and reinvigorate it. 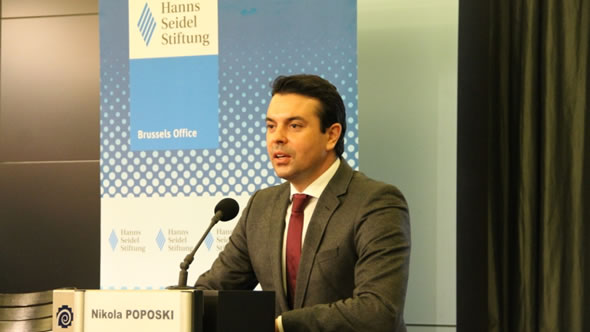