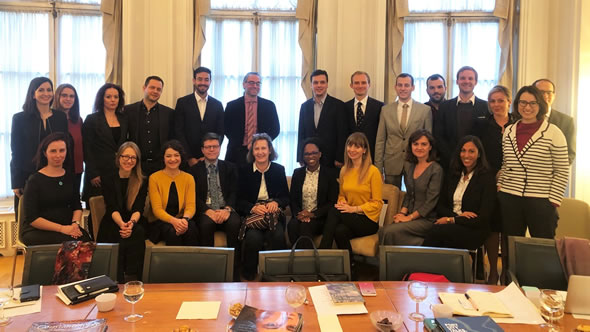 ESI's Senior Analyst Alexandra Stiglmayer discussed the implementation of the EU-Turkey Statement during a panel debate organised for young leaders from Turkey and Europe who were visiting Brussels in the framework of the "Turkey Europe Future Forum" (TEFF). TEFF is a project of Stiftung Mercator in cooperation with TUSIAD and the Berlin Bosporus Initiative that promotes exchange between young leaders from Turkey and Europe.

She said few aspects of the EU-Turkey Statement work as planned and criticised in particular:

All the problems have been aggravated by an increase in arrivals, she said. In September, more than 10,500 people arrived on Greek islands, and in October it was 9,000, which was 2.5 times more than during the same months last year.

Alexandra said the only positive aspect was the use of 6 billion Euro in EU assistance for refugees in Turkey, which has brought many tangible benefits: 1.7 million refugees receive every month 120 Turkish lire (ca. 19 Euro) in cash assistance via a debit card, half a million school children receive cash support to go to school, the EU has also financed 8 million medical visits and is active in many other areas.

The other panellist, Ruud van Enk from the European Commission, provided further details on the "EU facility for Refugees in Turkey" and briefed participants on discussions on how to continue EU support after the end of this year when all 6 billion Euro will have been allocated.

Alexandra proposed that the new Greek government focuses on securing a sufficient number of asylum and other staff on the islands and at the appeals level, and that is also calls on EU member states to deploy more caseworkers and interpreters through EASO who should be used more efficiently than so far. The goal should be, she said, to process the majority of claims within two months at both levels.

She also said the Greek Asylum Service and EASO need better information about conditions for returnees in Turkey, and suggested the establishment of an independent monitoring and verification mechanism in Turkey such as an ombudsperson. She said this should be part of a package offered to Turkey, which should also include new funds for refugees.

Lastly, she said, a coalition of willing member states should offer Greece concrete assistance. They could make an effort to send case workers and interpreters; to help Greece improve the reception conditions on the islands based on best-case examples from their countries; and even to relocate some of the recognised refugees once arrival numbers have gone down again.

She said there was no feasible alternative to the EU-Turkey Statement and that member states are playing with fire if they do not offer Greece concrete help and secure future funding for refugees in Turkey. In 2017, Greece was the EU country with the highest number of asylum requests per capita, and in 2018 it was second after Cyprus.

The "Turkey Europe Future Forum" brings together young leaders from Turkey and Europe for intensive dialogue in Turkey, Germany and other European countries. The forum, which was founded in 2015 to develop common understanding between young leaders from numerous sectors in Europe, is co-presided by Ruprecht Polenz, Former President of the German Parliament Foreign Affairs Committee (2010-2013) and Ümit Boyner, Vice President of TÜSİAD High Advisory Council and Boyner Holding Board Member. In addition, Federica Mogherini, the High Representative of the EU for Foreign Affairs and Security Policy supports the Forum.