Oldenburg – ESI at discussion on migration and employment

ESI’s Gerald Knaus was invited to give a presentation on “Who are the new ones, anyway?” at the “Oldenburger Schlüsselgespräche”, organised by the Bundestechnologiezentrum für Elektro- und Informationstechnik (BFE).

In his presentation, Gerald spoke about the myths and fears when it comes to migration and how politicians and media are exaggerating the numbers of migrants trying to reach Europe, leading to predictions of dozens or hundreds of millions to come in the future. Gerald stressed that it is important to put numbers into context and see where the majority of refugees are concentrated across the world.

He added humane policies and borders are best suited to discourage irregular migration. There is empathy for migrants but without control thousands are dying in the Mediterranean every year. It is the deadliest border in the world.

Gerald also spoke about the German government’s intention to reduce irregular migration and expand regular migration schemes to prevent deaths at sea. To achieve this, agreements with third countries will need to be concluded to take back those who do not need protection.

Citing the example of Canada, Gerald showed how their sponsorship programme has helped refugees and that this should be copied in Europe, especially by Germany and the Benelux countries. Here is where civil society and religious communities can play a big role. Sponsorships can have a positive impact for migrants seeking job opportunities in Europe.

Gerald also participated in a panel entitled “Young talent from abroad” for a deeper debate on qualified migrants and the need to find better pathways for their integration. 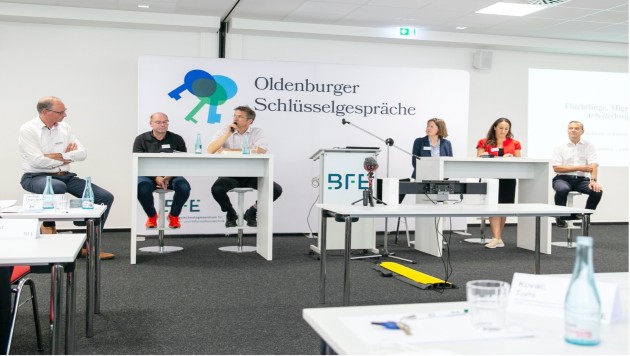