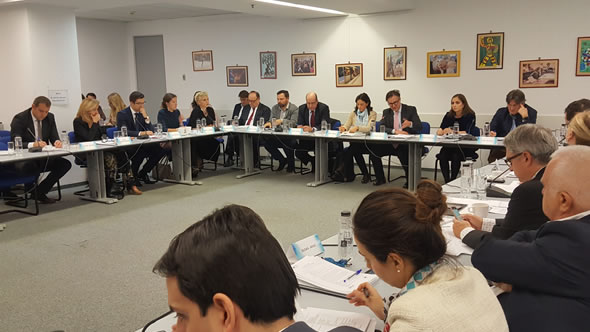 On 29 October 2018 ESI's Kristof Bender attended a seminar on "EU enlargerment to the Western Balkans" in Bucharest. It was organised by Global Focus in preparation for the upcoming EU presidency of Romania.

Kristof delivered kick-off remarks on a panel about the Prespa Agreement between Macedonia and Greece and the possibilities of an agreement between Kosovo and Serbia. Kristof highlighted the differences between the two agreements. The success of the Prespa Agreement, precisely defining what it is about (the change of word in Macedonia's state name) and how it will be implemented, would remove a 27 year old dispute in a peaceful way. It would be a crucial boost for Macedonia, the region and the EU' position in South East Europe.

In contrast, a Serbia-Kosovo deal along the lines sketched by presidents Vucic and Thaci leaves many questions open. It is opposed by strong majorities of Kosovo Albanians and Kosovo Serbs alike, would run into manyfold technical problems when it comes to practical implementation, and would mean a return to the principle that drove the wars of the 1990s, the idea of unifying all members of an ethnic group in a single mono-ethnic state. While it is highly unlikely that any such agreement would ever be implemented, already discussing such ideas as feasible and legitimate strengthens nationalists in the region, in particular those that play with ideas of tearing their countries apart.

Kristof also shared a short background paper with a few ideas on how the EU can inspire reform and strengthen reformers in the Western Balkans by focusing the accession process on tools that have previously worked. Read more about this in "A West Balkan Agenda for 2019".