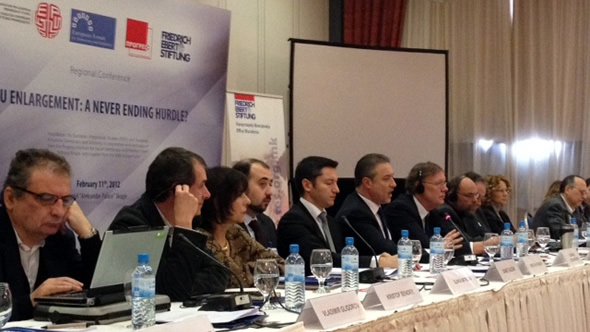 ESI's Kristof Bender was in Skopje to discuss EU enlargement with social democrats from South Eastern Europe and the EU. The conference was organised by the Foundation for European Progressive Studies, the European Forum for Democracy and Solidarity, the Institute for Social Democracy "Progres", and the Friedrich Ebert Stiftung. He spoke on a panel on political obstacles for EU enlargement, chaired by former Macedonian Foreign Minister Ilinka Mitreva, with economist Vladimir Gligorov and Kristian Vigenin, a Bulgarian MEP and the chair of the PES Task Force on the Western Balkans. Kristof talked about visa liberalisation and the transformation of Croatia. These are two recent success stories that show that the EU accession process can work also in the current circumstances, with all the economic and fiscal challenges that lie at the heart of the Euro crisis.

Kristof outlined opportunities for the current political leaders of South Eastern Europe and sketched a few ideas on what enlargement-friendly EU member states could advocate for in order to strengthen the somewhat tarnished credibility of the accession process. Admitting all Western Balkan countries, including Kosovo, as observers to the first part of screening when Montenegro will (probably) start with this process in mid-2012, would cost nothing, but send an important signal and provide motivation for civil servants all over the region.

On 9 February Kristof also gave a talk on the prospects for EU enlargement at the Mother Theresa public policy school of the Center for Research and Policy Making (CRPM).