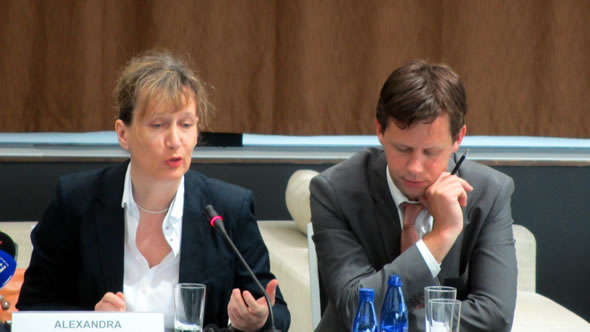 ESI Senior Analyst Alexandra Stiglmayer spoke at a conference on Montenegro's accession talks with the EU and EU enlargement to the Western Balkans in general. She underlined that enlargement is still happening, which is the good news: Croatia is joining in a few weeks, Montenegro is negotiating and Serbia is likely soon to receive a date for negotiations. But she also mentioned that there is a deepening division between those three countries and another four that seem to be stuck: Albania, Bosnia, Macedonia and Kosovo, the latter two being stuck due to external factors. She elaborated on the situation in Albania where the Electoral Code was violated in the run-up to the national elections on 23 June, which does not bode well for the elections.

After briefly discussing the situation in each country, Alexandra said that the current enlargement process is too "front-loaded", which means that candidate countries are asked to meet too many seemingly arbitrary conditions before they get to the stage of accession negotiations. This fails to capture the interest of some leaders since it is too drawn-out and abstract. It also runs counter to EU interest since much more meaningful reforms happen once negotiations begin.

In response to a previous comments that Croatia may not be ready, Alexandra said Croatia was the best-prepared acceding country ever and listed what Croatia has undertaken to qualify for EU accession.

The conference was organised by the Montenegrin think-tank CEDEM (Centre for Democracy and Human Rights), the Robert Schumann Foundation, the Konrad-Adenauer-Stiftung, and the German and French Embassies to Montenegro. Other speakers included the presidents/ambassadors of the organisers, the Montenegrin Chief Negotiator Aleksandar Pejovic, the head of the EU Delegation to Montenegro Mitja Drobnic, members of the German and French parliaments, and many more. In the afternoon, the implementation of chapters 23 and 24 were discussed in detail.

Read Alexandra's speaking notes and the agenda of the conference. 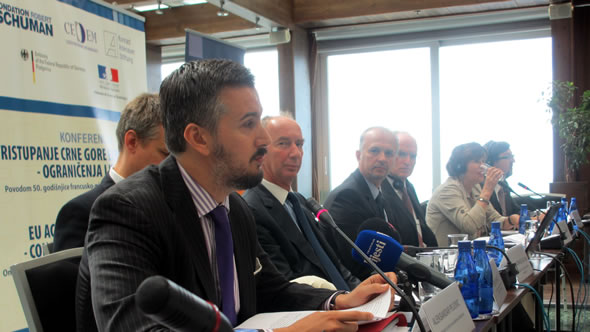