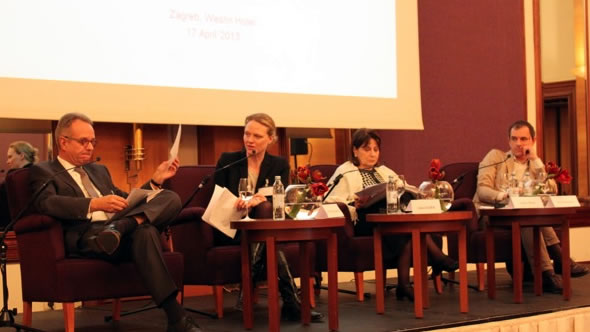 ESI's deputy chairman Kristof Bender participated in a conference on "Further EU Enlargement in South Eastern Europe - the road ahead". The event, taking place in Zagreb on 17 April 2013, was organised on by the Institute for Development and International Relations from Zagreb and the Swedish Institute of International Affairs from Stockholm.

Kristof spoke on a panel with Paul Vandoren, head of the EU Delegation in Croatia, and Jelica Minic of the Regional Cooperation Council. Moderated by Anna Jardfelt, director of the Swedish Institute of International Affairs, they discussed the implications of Croatia's accession to the EU, the future of EU enlargement in the Western Balkans, and what the EU can do not to lose momentum in South Eastern Europe.