Secretary Albright underlined the importance of women in decision making positions, emphasizing that democracies where women have a fair share in politics and the economy are more stable. She pointed out that women are more effective in many areas such as education, culture, and social policy because they understand the needs of people better. Answering a question about the headscarf, Albright replied that she believed women needed to respect other women's choices.

The event, where ESI's report on Islam and feminism in Turkey was discussed widely in the brainstorming session, continued among the Turkish participants upon the departure of Secretary Albright. A number of participants agreed that recent developments could indeed be termed a "revolution" (as ESI's report put forth). A parallel was drawn between the point made in ESI's report regarding activist women's exclusion in the early years of the Republic and the fact that political parties today are not drawing from the women's movement or from the grassroots of their party organization in selecting candidates, but instead favoring women who do not have their own power base and will be unconditionally loyal to the party leadership. 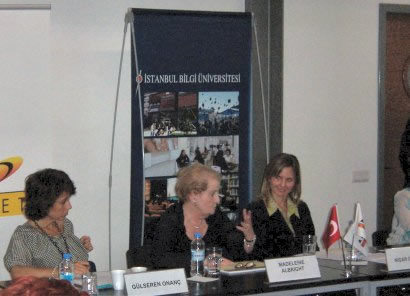