Berlin – ESI at the Bundestag: Turkey in the Erdogan era - parting with Europe? 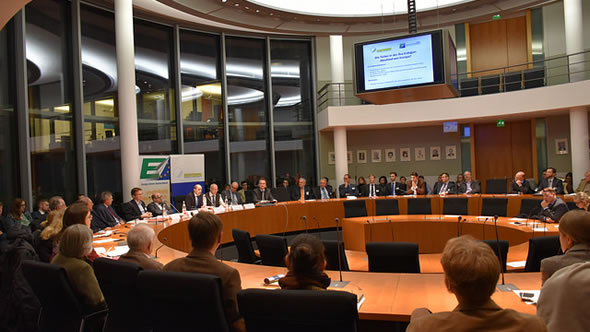 ESI's Gerald Knaus was invited to participate in a panel discussion on the current situation in Turkey at the German Bundestag organised by the Südosteuropa-Gesellschaft. The other speakers on the panel were Manuel Sarrazin, Green MP and Günter Seufert, Senior Fellow, Stiftung Wissenschaft und Politik.

Gerald described how deeply entreched the idea of creating stability by centralising power is in Turkey's political culture and how the discourse of "fighting enemies" has always led to a decrease of political stability and violations of human rights in Turkey's past. He also criticised the way the EU accession process currenty works as it fails to define European standards and reforms necessary to fulfil them. He opposed the notion that Turkey is now showing its "true face" and referred to the example of other democracies under extreme pressure such as France in the Algerian War when politicians such as Robert Schuman und Francois Mitterand gave their military a carte blanche for torture and murder. Turkey is not different but is making the same mistakes and reacts in a similar catastrophic way. The EU therefore has a vested interest in showing that such policies are always wrong and never work. More here (in German).