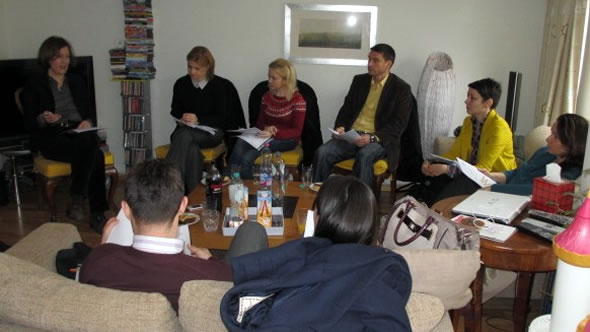 On 26 March, ESI Senior Analyst Alexandra Stiglmayer briefed representatives of Serbian think-tanks and NGOs on EU enlargement policy. At the heart of her presentation was ESI's proposal how to turn the European Commission's annual progress reports into powerful instruments driving the enlargement process forward to the advantage of both the candidate countries and EU member states. Her speaking notes are below; see also "Enlargement reloaded – ESI proposal for a new generation of progress reports".

The representatives of Serbian think-tanks and NGOs were participating in a one-week study visit of Brussels organised by the Belgrade Fund for Political Excellence in cooperation with the Institute for Sustainable Communities in Serbia. They showed great interest in ESI's proposal since it would allow them to follow Serbia's accession process more closely and offer them more opportunities for advocacy.

Speaking notes: The future of enlargement