ESI on Bosnia: The role of the young generation 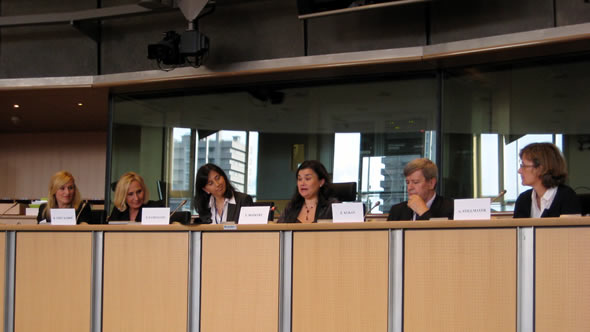 View of the panel, Alexandra Stiglmayer on the right. Photo: European Parliament

On 30 September 2010, ESI Senior Analyst Alexandra Stiglmayer participated in a conference called "Bosnia-Herzegovina and the EU: the Past, the Present and the Future" at the European Parliament. The event was organised jointly by Dutch MEP Emine Bozkurt (S&D - the group of Socialists and Democrats in the EP) and Mladi BiH (Young People BiH), a Dutch NGO.

Besides Alexandra, the speakers on the second panel were Emine Bozkurt, MEP and S&D Spokesperson on Bosnia; Valentin Inzko, High Representative and EU Special Representative in Bosnia; Hannes Swoboda, MEP and Vice-President of the S&D Group; Zaim Pasic, President of the World Network of BiH Diaspora; Anders Levinsen, Director of the Cross Cultures Project Association; Paola Pampaloni, Head of Unit for Bosnia at the European Commission's Directorate General for Enlargement; Eduard Kukan, MEP and Chair of the Delegation for Relations with Albania; Mersiha Dzabic, representative from Mladi BiH; and Ruzmira Tihic-Kadric, BiH Ministry of Human Rights and Refugees.

In her intervention, Alexandra stressed that the citizens of Bosnia and Herzegovina must become more active and have to stop expecting the EU and the wider international community to fix all the problems. She said particularly young people have an important role to play in the political and social transformation of Bosnia. She said that the EU strategy towards Bosnia has been muddled over the last few years, but that the influence of EU policies has its limits and that the impetus for change has to come from the citizens. She called on the EU to put Bosnia and other Western Balkan countries firmly on the enlargement path since this process has lost steam. She said it was clear that Bosnia, which is currently the taillight, would not want to be left behind if it sees other countries moving ahead. The also said the visa liberalisation process showed the capacity of the country to deliver if there is political will, which shows that the problems of the institutional set-up can be overcome under the right circumstances.