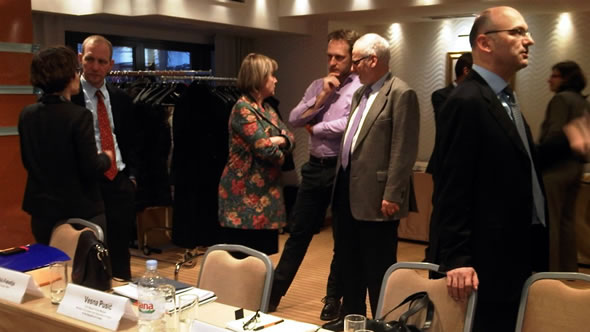 Photo: European Fund for the Balkans

ESI's Kristof Bender was invited to speak at a meeting of the Balkans in Europe Policy Advisory Group on 30 January 2014 in Zagreb. The group was established by the European Fund for the Balkans and the Centre for the Southeastern European Studies of the University of Graz. It was formed to develop new ideas how to assist the Balkan countries in their transition "from unconsolidated democracies and weak economies to the stage of EU accession."

Kristof, speaking on a panel with Dejan Jovic, adviser to Croatian President Ivo Josipovic, presented some of ESI's ideas how to revive the EU enlargement process through, drawing on experiences with Croatia, the visa liberalisation process and the idea of competition (a central ingredient also of the last enlargement round). For an overview of these ideas read this article on the Rumeli Observer.

On 29 January, Kristof was received by Croatian Foreign Minister Vesna Pusic to discuss some of ESI's ideas on the future of enlargement.