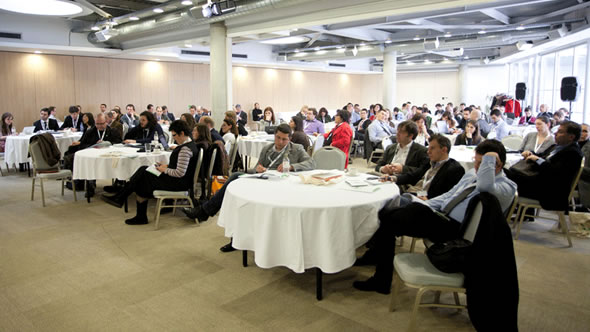 ESI Senior Analyst participated in, and spoke, at the "Balkan Peer Exchange", a three-day work shop for some 60 think-tanks, advocacy organisations and donors working in the Western Balkans. The gathering in Belgrade from 21 to 23 February 2012 was organised by Open Society organisations, the Balkan Trust for Democracy, the National Endowment for Democracy and the European Fund for the Balkans. The goal was to offer "a space for peer-to-peer exchange of practices, positive and negative lessons learned, and brainstorming on new innovative ideas."

Alexandra was one of the speakers on the panel "Digging Deep in the International Relations of the Region: External Actors in the Western Balkans". She spoke about the role and performance of the European Union in the Western Balkans. She said the EU is politically and financially the most important external actor in the region and one that has something unique to offer: a blueprint how to transform the political system, society and the economy, and achieve membership.  She said enlargement is currently no priority for the EU and has clearly become more difficult, but  that it still works: that Croatia shows its transformative power, and that candidate countries such as Montenegro, which is due to start negotiations this summer, still make progress.

In order to improve the process within the current constraints, Alexandra made three recommendations:

The other speakers on this panel were Dusan Reljic from the German Institute for International Affairs and Security (SWP) in Berlin; Sam Greene, Director of the Center for the Study of New Media and Society, Russia; and Zhidas Daskalovski, the President of the Center for Research and Policymaking in Macedonia (CRPM). The moderator was Fabrice de Kerchove from the King Baudouin Foundation in Belgium.

Visit ESI's enlargement pages at www.esiweb.org/enlargement and click here for the Facebook page of the Balkan Peer Exchange where you can find a video recording of Alexandra's panel. An event report by the European Fund for the Balkans is available here.