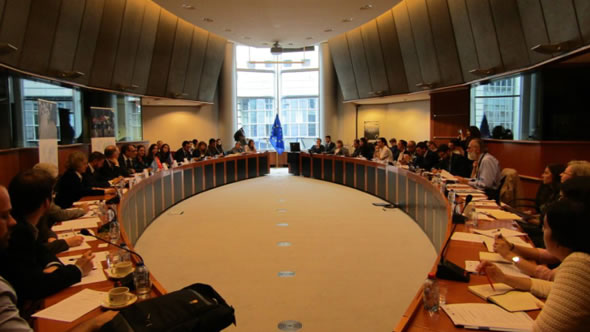 ESI Senior Analyst Alexandra Stiglmayer spoke at an expert meeting at the European Parliament, advocating visa liberalisation for Turkey. The "Visa Liberalisation Expert Panel – Socio-Economic Effects on Turkey and the EU" was chaired by MEP Ismail Ertug and co-organised by the think-tank European Neighbourhood Council, the Friends of Turkey in the European Parliament (an informal group of MEPs) and the NGO Young Friends of Turkey.

Alexandra said the European Parliament and European Commission have driven themselves into a corner by insisting on the fulfilment of all 72 benchmarks of the EU's 2012 visa liberalisation roadmap for Turkey before being willing to consider lifting the entry visa requirement for Turkish citizens. She stated that – as ESI wrote already in 2013 – the roadmap should be treated as the EU's negotiating position and not holy writ.

Seen in this way, Turkey has gone beyond the requirements of the roadmap whose overarching goal has been to gain Turkey's cooperation in stemming irregular migration to the EU. She noted that as part of the 18 March EU-Turkey agreement, Turkey has committed itself to taking back not only irregular migrants, but also asylum seekers, and to offer them protection in Turkey. She noted that the agreement has significantly reduced irregular crossings from Turkey to Greece. While in January 2016, the number of migrants arriving on Greek islands was close to 2,000 per day, it has dropped to around 50 per day in May and June, according to UNHCR.

She also stressed that Turkey has made huge efforts in recent months to implement the roadmap, fulfilling 66 of the 72 benchmarks, according to a Commission report published on 4 May.

Alexandra agreed with the view of many MEPs that the human rights situation in Turkey was alarming. However, she said that amendments of Turkey's anti-terror laws – which is the most important open roadmap requirement - would not change this since their use to silence critics is a symptom and not the cause of the persecution in Turkey; besides, she said, the authorities could then use – and already use - other criminal offenses to prosecute opponents. She suggested that the EU design a new mechanism for all EU candidate countries under which it would define "red lines" concerning human rights, in particular in the areas of freedom of expression and of assembly. It should elaborate criteria, then monitor the situation and punish countries that consistently cross the red lines, for example by withholding pre-accession funds.

Alexandra said that withholding visa-free travel from Turkey would not harm the ruling class since all political office holders and senior civil servants including teachers, prosecutors, judges and police officials have so-called "green" (special) passports with which they can already travel visa-free to European countries. Those who suffer from the short-stay visa requirement are activists and human rights defenders, journalists, businesspeople and the travelling middle class – those with whom the EU would like to establish a closer dialogue and who should be encouraged to travel to the EU more often.

A refusal to lift the visa requirement would also put the 18 March agreement at risk as Turkey has announced that it would stop implementing it if the EU does not scrap the visa requirement. The EU, however, would not be able to handle another refugee influx like 2015. The 2015 influx has already led to a rise in support of illiberal, populist, right-wing parties and to asylum policies that violate the UN's Refugee Convention.

The other speakers at the event were: