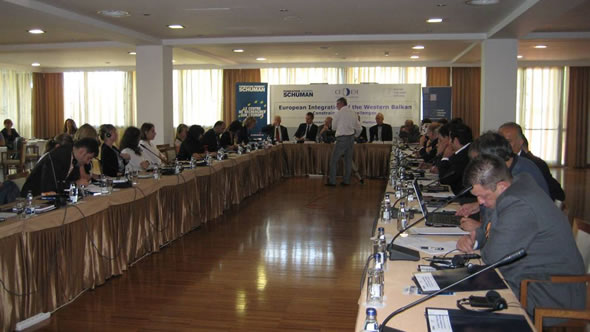 On 29/30 September 2012, ESI Senior Analyst Alexandra Stiglmayer spoke at the conference "European Integration of the Western Balkans – Constraints and Challenges." This conference in Budva, Montenegro, was organised by the Montenegrin Center for Democracy and Human Rights (CEDEM), the Robert Schuman Foundation and the Konrad-Adenauer-Stiftung.

Alexandra said the current financial and economic crises in the EU have pushed enlargement policy down the priority list. She said the lack of enthusiasm and delaying tactics have had negative consequences in the Western, and cited Albania and Bosnia as examples where there has been little progress and little belief in the European perspective.  The situation is compounded by the Greek veto on accession progress by Macedonia, and the fact that five EU member states have not recognised Kosovo, she said.  However, despite these constraints, it is possible and advisable to continue and improve enlargement policy, Alexandra said. After all, EU leaders are aware that integration in the EU is the only guarantee for lasting stability in the Western Balkans, she added.

Alexandra mentioned two recent developments that hold important lessons: The first lesson is from the successful accession negotiations with Croatia, which showed that the real, transformative reforms happened at the later stage of the negotiations. The second lesson is from the visa liberalisation process with the Western Balkans, which showed that direct comparisons, which ESI carried out, created healthy competition between the five participating countries. When Albania and Bosnia realised that they were lagging behind the other three countries, they made enormous efforts to catch up. In Bosnia, it should a readiness to make compromises and find solutions that had not been seen in years. The conclusions are clear, said Alexandra: The EU should not keep countries in the "waiting room" for too long, but start negotiations as soon as possible. If the negotiations last long, so be it, at least they produce real reforms. It would be even better if the states could start the negotiations at around the same time, so that think-tanks and civil society organisations could monitor them and make comparisons – this would create competition and speed up the reform process.

On Alexandra's panel, there were two other speakers: Leopold Maurer, head of the EU Delegation to Montenegro; and Jean Dominique Giuliani, president of the Robert Schuman Foundation.